Well it's been another mad week

My son has been looking after a cat for a few months who has adopted him at his unit, it was bitten on his back by a rat 2 years ago so he has a very wonky walk & run, has head tremors & has bad co-ordination, the owners abandonded him due to being 'not right' & the people who took him on said it would only be temporary as they already had 6 cats

Well me being the soft touch decided it was getting too cold to be living in a unit & agreed to him coming home thinking he'd get on with my 2 cats being so docile, Friday night he came home, had a bath to get rid of all the grease & general car muck he's picked up then settled in, my 2 were very wary of him understandably

Well my days since then it feel like its been 24/7, to stop him going out of the cat flap he's in my son's bedroom at night but at 3.30 he decides to eat which entails skidding his bowl around his tray as his head bobs 5 times before he actually manages to pick up his biscuits, then when my son gets up he goes to the garden on a lead so he doesn't escape, he's very heavy footed so you hear him plodding on the laminate, he crashes down when he jumps off the settee & i'm terrified he'll fall down the stairs as he trips going up

Monday & Tuesday it was like watching a toddler as I have to follow him to the kitchen to make sure his doesn't escape the cat flap then watch him when he goes into my craft room as it has no door & if he goes upstairs as I can't shut the doors because of my 2, well I'm absolutely shattered & we decided last night he has to go back to the unit as with me having MS I've fallen over him 3 times & being on my own during the day wandering after him is totally wiping me out plus once I fall I can't get up on my own

He's a lovely cat but would suit an old lady that has no pets as he just wants fuss but is too curious looking for my 2 who are in hiding all the time which isn't fair on them, if he goes on your knee for cuddles he can stay for hours but then i'm stuck, my son now has to find a kennel or something to keep him warm overnight during the winter as it looks like he's stopping with him in the unit as he won't give him away

This is Bob with his head shakes

On to this weeks normality !!

Our wonderful sponsor is 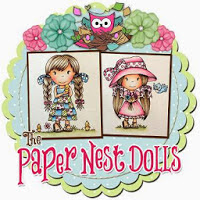 The Prize for the winner is 3 Digi Images

Here is my card for the challenge 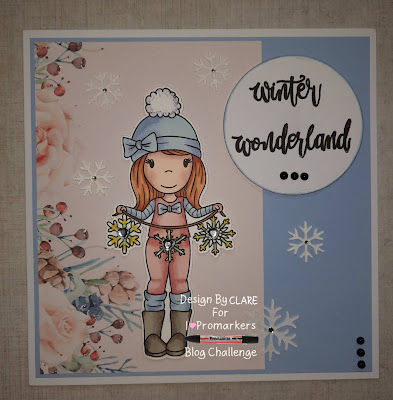 I have used Emma with snowflake banner by Paper nest dolls, I love this image it is so cute
My trustee promarkers
My 3 layers are blue card, pink design paper then the image, sentiment & embellishments make up the 3rd layer

Email ThisBlogThis!Share to TwitterShare to FacebookShare to Pinterest
Labels: #423

Clare Jones
Mold, Flintshire, United Kingdom
I am no longer working due to my MS progressing, my only sanity is colouring using my promarkers